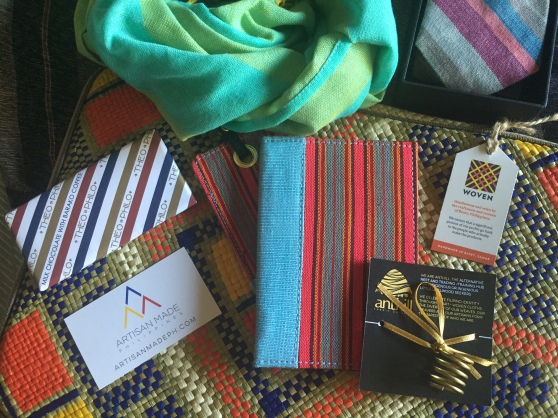 Ay nako!  It has been almost 2 years since my last post!

Yesterday, I attended an amazing launch event for Artisan Made Philippines.  Overnight my cup runneth over with the sense of Pinay Pride.  And just in time!

One of the biggest things that has been weighing down on my mind, heart and soul has been my struggle to teach my kids Tagalog and cultivate their Filipino identity.  Yes, I speak to them exclusively in Tagalog, but I know my version of Tagalog is not enough.  I myself need some immersion crash course in order to discuss more complex thoughts and feelings with them.

Thanks to Artisan Made, I came away from last week feeling connected to a vibrant Filipino-American community.  I’m feeling happier.  It’s the kind of feeling you might experience when you spend a whole day with cool cousins.  Mind you, I only knew Kristine Surla, the founder of Artisan Made when I walked in the door, but everyone felt familiar as they shared their stories of being Filipino or Filipino-American.  It didn’t matter that we were from all different parts of the Philippines or different parts of the US.

It’s a huge understatement to say that I was thrilled and inspired.  The day wasn’t about fleeting fashion trends.  It was about Filipinos and Filipinas making a difference in other people’s lives.