Our friend, Korey Provencher, from Isaac Mizrahi has been working on his own side project — Kors d’Oeuvres!!! Isn’t that cute! We helped him with his logo and label designs. Hope those of you in the NYC area will check out the launch this coming Saturday, November 21st, 2009!  Hope to see you then!!!!

We’ll be posting some of our own videos soon from our “Up Close and Personal” encounters with Manny Pacquiao. (Check out our previous blog posts.) In the meantime, here’s a short clip of us in the background for a moment in Episode 3 of HBO’s 24/7 series on the Pacquiao vs. Cotto fight. OK, so it’s blurry and you can’t really tell it’s us, but we WERE there and SO PROUD and honored to be there! It’s not every day that one gets to meet the Pride of the Philippines!

They’re replaying all the episodes tonight to get us all pumped for the fight! If you take a close look you’ll see us in the background during a shot of Buboy Fernandez in the parking lot of the Wild Card Boxing Club in Los Angeles… That’s Arlene wearing the orange Team Pacquiao hoodie (given to her… by Buboy himself!) and Ardith is wearing the Barkada(ko) Logo T in gold while our new friend from Team Pacquiao, Roweena Encarnacion, is rockin’ the Barkada(ko) Philippine Flag T in navy… PINOYS UNITE!

Many thanks to our close friend and Barkada(ko) supermodel, Gary Zane, who introduced us to Roweena and got the ball rollin’ so we could get on this Pacquiao Train!

The site of the historic first meeting between Manny and Barkada(ko)!

We were still reeling from our meeting with Manny and little did we know that it would get even better!  Since we didn’t have a chance to give Manny the illustration that my sister had specially made for him, we decided to go back to the gym the following day.  When we arrived, we realized that it was not an open training day but a media day; meaning open to the media only!  WHOOPS!  With the urging of our new friend Romy Medina, who we had met the day earlier, my courageous sister decided to go into the gym anyway carrying off her camera plus my camera in the hopes that it would give her a more “media” look.

A shot Ardith took while going on her solo paparazzi mission.

After 10 minutes or so, my sister pops her head out and frantically tells me that she doesn’t know how to take video on my camera.  I rush upstairs and luckily, security is busy with other things so we start taking pictures – double trouble style!!

Looks effortless when he trains!

Then, more wonderful luck!  We see our new buddy, Buboy, who’s with Manny and motions to us to come closer!  Like “Manny’s-jump-rope-is-almost-whipping-us” close! Like “I-can’t-focus-my-camera-because-he-so-close” close!

Hope that jump rope doesn't hit us! (Yes, the jump rope is there! You just can't see it because it's moving so quickly!)

Then Manny moves to the ring!  Again, we get primo spots and situate ourselves right in the front.  Manny’s speed and agility are truly amazing!  Trying to take clear pictures proves futile because he’s just too quick! 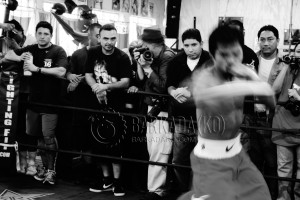 Don't blame us! He's just too quick to capture on film!

After Manny’s workout, security informed everyone that media day was over – which in security talk means “EVERYONE GET OUT!!!”  We were collecting our stuff and heading towards the door, when we hear “SSSSST,SSSSST!!!” (Filipino way to get someone’s attention); low and behold it was Buboy!  He knew that we still hadn’t given Manny the illustration/print that my sister had designed.  So while everyone else had to file out, we got to go into the ring with Manny, take some more pics, and present him with print – a symbol of our appreciation to him – the Pride of the Philippines!!

No doubt that this experience is forever burned into our brains!!!  I’m sure we’ll come up with artwork inspired by the great Manny Pacquiao.  In the meantime, please visit our online store to get your Philippine-inspired tshirts to wear on Saturday, November 14th, 2009, during the Pacquiao-vs.-Cotto fight!

Stay tuned for more photos and videos of our Pacquiao encounter!!!

Thanks Buboy for Everything!!

Manny and the Barkada(ko) ladies!

People were wondering who we were and why we got to take pictures with Manny. Just kidding! I took this shot way before we got our pictures taken with Manny! hehehe

My sister and I had the honor and privilege of meeting the Pride of the Philippines, Manny Pacquiao!  We never dreamed this could ever be possible but our good friend (and OG Barkadako model) Gary Zane introduced us to his friend/former co-worker Roweena Encarnacion, part of Manny’s LA inner circle!  We met her at the Wild Card Boxing Gym where she was sporting the Barkadako Flag shirt!  Love it!

Ardith with our new friend, Roweena.

While waiting outside, we decided to practice our paparazzi skills:

Shawn Porter, part of the sparring squad, poses for pics with fans.

While Manny was finishing up his closed training session, we met lots of fellow Manny fans, supporters, and friends.  The most popular probably being one of his trainers, BUBOY!  Super friendly and super funny!  He even gave us a stylish Manny Pacquiao Sweatshirt.  While Buboy was chatting it up with us and the rest of the folks waiting, HBO was filming him for the HBO 24/7 show.  If you watch the 3rd episode of the Pacquiao/Cotto series, you can catch a blurry glimpse of us! Check out the HBO website for more info!

Buboy in a BARKADA(KO) sandwich!

While we were outside, Manny had already ended his training session and was at his regular eating spot – a Thai restaurant in the same complex as the Wild Card Boxing gym.  A group of fans had formed outside waiting for Manny to finish his dinner.  We were thinking that this was the end of Day One: Mission to Meet Manny but to our surprise, with the help of Roweena and Buboy, we were ushered inside the small restaurant. YIKES! We walked in and there he was!  I looked around and recognized almost everyone.  From his trainers, to security, to his brother — pretty much everyone had a purpose there except for us!  We attempted to look like we belonged but we were the only two people with gigantour cameras around our necks; and the fact that we had identical crazy looks on our face from all the excitement didn’t help our efforts to blend.  A few minutes later, Manny got up to leave for the Jimmy Kimmell show – and that’s when Buboy urged us to get up so we could get a picture with him.  Even though he was late for the show, he was nice enough to stop and take a couple of shots with us.

Posing with the Barkada(ko) posse before heading off to the Jimmy Kimmell show!